DES MOINES, Iowa — This isn’t how the home stretch before the Iowa caucus was supposed to go.

Sen. Bernie Sanders, I-Vt., seemed to have been telegraphing a willingness to take on former Vice President Joe Biden for his judgment on the Iraq War, amid escalating tensions with Iran. That was the singular focus until the conflict between Sanders and fellow-progressive Sen. Elizabeth Warren bubbled into a fever pitch in the days leading up to the debate on Tuesday night here.

The public rift marks a sea change in a winnowing Democratic field, less than three weeks before Iowans are set to caucus on Feb. 3.

And the crux of the Sanders-Warren conversation — about whether a woman can beat Trump — also highlights uncomfortable questions about perceived “electability” and brings about the specter of Hillary Clinton’s 2016 loss. In conversations with a dozen Democratic operatives and aides, there appeared to be little appetite for, and much hand-wringing over, these topics of conversation — on Clinton, on 2016 or on electability and gender.

One Democratic operative, when asked how they felt about this being the fight leading up to the debate, told NBC News: “Heavy sigh.”

The Sanders-Warren fight escalated quickly, when reporting about a Sanders campaign volunteer script that spoke negatively about Warren was met with an uncharacteristically blunt response from Warren. She said on Saturday that she was “disappointed” in Sanders, reminding of the “factionalism” that some say Sanders fostered against Clinton in 2016.

Then, on Monday, new details about a 2018 Sanders-Warren tete-a-tete burst into the news. “Among the topics that came up was what would happen if Democrats nominated a female candidate,” Warren said in a statement about their private meeting. “I thought a woman could win; he disagreed.”

Warren allies told NBC that the senator’s hand was forced in releasing the statement on the meeting after Sanders campaign manager Faiz Shakir called to hear from her about the account. But Warren’s statement also clearly tries to de-escalate the situation — “Bernie and I have far more in common than our differences on punditry.” That vibe was echoed by public statements by the Sanders campaign, which went from calling the accusation “a total fabrication,” to explaining the differing accounts of the meeting by saying “there were some wires crossed.”

But this food fight doesn’t just affect Sanders and Warren.

There’s much consternation among progressives, concerned that their two champions will no longer be a one-two punch in defense of their signature policy proposals, like “Medicare for All.” Some progressive groups — including the Warren-allied Progressive Change Campaign Committee — have called the “back-and-forth about this private meeting … counterproductive for progressives.”

“The campaign is eager to push forward, but people were gobsmacked by it. Devastated that the accusation was made,” he said.

The man who progressives hoped would be taking more fire in the lead up to the debate stage — Biden — is staying out of the fray.

Even though the former VP will literally be standing between Warren and Sanders on Tuesday night, three Biden aides telegraphed that Biden will do his best to stay out of the spat between his rivals.

This also presents both a potential issue, and opportunity, for Sen. Amy Klobuchar of Minnesota.

The only other woman on the debate stage Tuesday night, Klobuchar has highlighted her gender, and ability to win, in past debates and is expected to do so again, if the issue flares up.

“There is a lot of talk today about if a woman can beat Donald Trump,” Klobuchar tweeted Monday as the Sanders-Warren feud escalated.

Another candidate who will be sharing the debate stage, Tom Steyer, said Tuesday morning that he was surprised by the Bernie-Warren spat, but “it’s an election. Stuff happens that you don’t expect every single time.”

But on the question of whether a woman could win, Steyer said: “I don’t think there’s two sides to this question. I don’t think its fruitful, but I also think, it’s sort of like climate: There’s one side to the argument. There’s no other side.”

Ali Vitali is a political reporter for NBC News, based in Washington.

Shaquille Brewster is a political reporter for NBC News and MSNBC.

Marianna Sotomayor is a 2020 campaign embed for NBC News.

U.S. election czar says attempts to hack the 2020 election will be more sophisticated

‘Doubters were wrong all along!’ Project Fear destroyed as UK outperforms EU 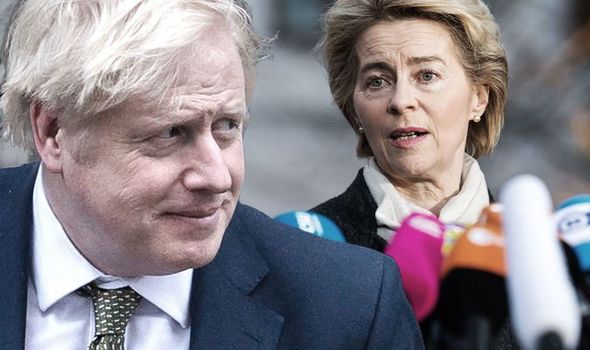 PROJECT Fear was wrong and Britain is poised for a “golden decade” once it leaves the EU at the end of the month, Brexit-backing Tory MP John Baron has predicted.

Schiff thanks senators for being open-minded

House impeachment manager Rep. Adam Schiff thanked senators for being open-minded as the case is being presented, and encouraged everyone to re-read the transcript of Trump’s phone call with Ukraine.

House impeachment manager Rep. Adam Schiff hammered home his point that Trump is guilty of what he has been impeached for and made the case for removal from office.